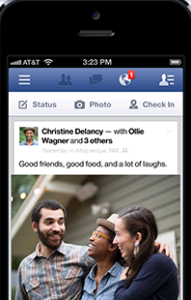 Mobile was the highlight of Facebook’s 3Q results, as Facebook’s mobile advertising grew to ~$152mn. This rapid mobile ramp is encouraging as it showcases Facebook’s ability to draw advertiser display dollars into mobile (which generally continues to be a challenging medium for display advertising) as the company keeps innovating and improving monetization around its overall platform.

That said, it is important to note that for now we believe this quick mobile ad traction is largely (though not entirely) being driven by advertiser Facebook budget shifts away from poorly performing units (such as non-FBX right rail units) to new, better performing mobile Sponsored Story units. The availability of mobile units has indeed caused budget shifts within Facebook as desktop advertising year-on-year growth decelerated. In all, mobile contributed to 53% of Facebook’s total platform 3Q:12 advertising growth. This is due to multiple factors including: advertiser preference for better performing units on the platform, mobile making up a larger portion of the total Facebook use and ad units available